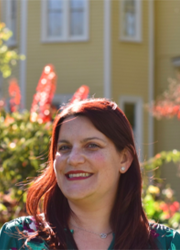 Rachael Goldberg is the Executive Director of Liberty Hall Museum, Gardens and Arboretum, one of New Jersey’s premier historic tourism destinations. Rachael’s career in museums began at Liberty Hall in 2008. She was originally hired as a museum educator to conduct daily public tours, work with school children, and assist in producing special events. After working as a museum educator for a year, Rachael was promoted to the museum’s Coordinator of Collections and Exhibits. Her role was to begin the daunting process of inventorying the museum’s extensive collections and create exhibitions that interpreted the collection for contemporary audiences. She has been Liberty Hall’s Executive Director since 2019 and oversees the daily operations of the museum. Rachael received a Bachelor of Arts in History and Political Science from the University of Rhode Island as well as a Master of Arts in American History from Monmouth University. In 2013 she completed Drew University’s Historic Preservation certificate program and is currently completing her MBA at Rider University.