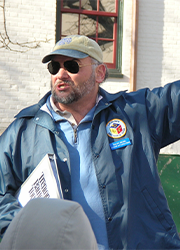 Ralph Siegel is a Licensed Battlefield Guide at Gettysburg National Military Park. He established Trenton Battlefield Tours 21 years ago to present a battle narrative of the crucial surprise attack against a garrison of German regiments. His walking tours have been featured in the annual Patriots Week programs. He has also conducted tours for C-Span “American History Television,” the American Institute for History Education, the U.S. Army Training Directorate at Fort Dix, the Association of Licensed Battlefield Guides, and Villanova University. Mr. Siegel is a frequent presenter at conferences, history roundtables, and other meetings. He lives in Mercerville with his wife Donna but will be relocating soon to Gettysburg, Pa. He retired last year as executive director of the Garden State Preservation Trust, which arranges funding to the New Jersey Historic Trust and to the state’s conservation and preservation agencies.